5 apps that I cannot live without

Okay, that should probably be ‘5 apps that I cannot work without’, but if there’s one thing we know about the web, it’s that we love a bit of hyperbole in a blog post title There are some apps that become so engrained in your every day that oftentimes you don’t even realise you’re using...

Okay, that should probably be ‘5 apps that I cannot work without’, but if there’s one thing we know about the web, it’s that we love a bit of hyperbole in a blog post title

There are some apps that become so engrained in your every day that oftentimes you don’t even realise you’re using them.  The perfect app.  An app that either complements or improves your workflow to such an extent that you can no longer imagine what it’s like to be without it.  There aren’t many, to be fair, but here are five that have done it for me.

I still remember when I first installed Dropbox – it was back in 2008 and the sense of relief as I realised what it would mean to me was palpable.  Simply put, I never had to email another file home again.  I typically have 3 common places where I work: my office, at home, with clients / on the road.  And, for a large part, I had 3 separate machines for each.  If I wanted to work from home one day, I’d email files from the office (or put them on a memory stick).  Then, I’d have a version of the file on my work computer, a version on the computer at home – which would be ahead of work, and a version on the memory stick.  With dropbox, all my files were in one place simultaneously, and would sync whenever I made changes.

I appreciate that with iCloud, and Google Drive, and whatever else, this is now quite commonplace, but I’m sticking with Dropbox – it was the original, it’s the best, and it’s changed the way I work for good.

Alfred is an award-winning productivity application for Mac OS X, which aims to save you time in searching your local computer and the web

Exactly that.  Any day you can spend less time looking for something, and more time using that something, is a good day.  Any time I need a file, it starts with CMD-space.  Then I just start typing.  95 times out of a 100, I find the thing I’m looking for and I’m away.  Yes, there are some annoyances: there are some items it can never find, I wish it would let me search a directory structure (i.e. typing clients/file_name would start the search in the ‘clients’ folder), but they only make me appreciate how often it gets it right.

I upgraded to the paid for ‘Powerpack’ version, but I didn’t need to – everything I use in Alfred is available in the free version.

(Alfred App is Mac only, but here are some alternatives for Windows users: Copernic Desktop Search, or Everything by Voidtools.  Google used to have Google Desktop, but it looks like they discontinued it a while back.

Yes, yes you have.  Not any more … I use 1Password all the time, and for everything.  It remembers all my passwords, it generates secure passwords for me when I need to create new ones, and it syncs (via Dropbox, natch) across all my devices.  It’s even available for PC now.  Beautifully simple to use, and – like the others on this list – integrates so smoothly with my workflow that I cannot imagine being without it.

The major reason for the fact that ‘password’ was the number one choice of password for web apps in 2012 (I know, I know) is that secure passwords are secure for a reason – namely they’re very difficult to remember.  Well, let 1Password take the strain … not only will it remember your passwords, it’ll generate secure ones for you as well.

There’s not much to say – it does essential tasks really well.

I’ve only been using this for a couple of weeks, but I reckon I’ve saved myself at least half a day of time wasting, procrastination and lack of focus.  Sticking well to the mantra of ‘do one thing, do it well’, this great little app blocks your access to the sites that distract you during the day.  Quickly create a blacklist of sites you want to block from yourself (mine are Facebook.com, the BBC, and The Guardian), click ‘go’ and you won’t be able to access those sites until the specified time is up.  Not even rebooting your machine will bring those time suckers back.  Perfect for those of us with less self control than we’d like.

I check all my Facebook stuff, cricket scores, football news, etc. first thing in the morning, and then click go.  I’m smart enough (usually) to stop it around about lunch time so I can check it then – just in case, y’know, I’ve missed anything vital – and then it’s back on in the afternoon.

(Self Control is Mac only, but here are some lternatives for Window’s users: Self Restraint seems to be similar, but I’ve no experience of it myself.) 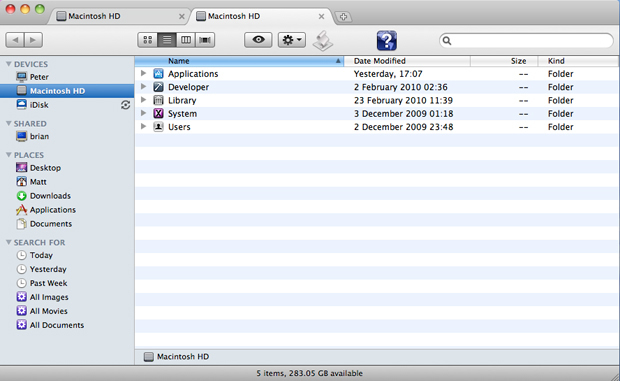 Total Finder is such a simple utility that I nearly forgot I used it … trying to round out this list I wanted to include a few apps that are essential to my job (Coda, Fireworks, Omni Outliner, and so on) – but, essential though they are, they are tools for actually ‘doing’ the work, not for enhancing it: they don’t become engrained in my workflow because they are my workflow.  Total Finder though is different … the default Finder that comes with the Mac is okay, but it’s far from great.  You know what it needs?  It needs tabs.  You know what else?  It needs to allow two connected tabs – side by side – so you can drag stuff between locations easily.  Plus – you can anchor it to the bottom of your screen, which is also nice – and open it up with a hotkey.

That’s it.  Simple, but super useful.  Why Apple have not implemented tabs in Finder by default is a mystery to me – it seems like such a no brainer (Oh, and while they’re at it – they could have tabs in the iTunes store too, that’d be great).

In the mean time, Total Finder will do the job for you.  (See also Pathfinder – which I’ve used before, and is excellent, but seems like overkill for what I wanted)

So, that’s my list … there are a ton of other applications I use every day, but these tiny little utilities enhance my work flow without me even noticing.  Without them, I’d be stuck.  What apps would be on your list?

If the thought of missing a post is just too upsetting, you can sign up below and you’ll be notified, every so often, when we have a clutch of things to share. Once a month, at most.