I was fed up with how I was processing my email – it seemed to have little relevance to the way I work, clogged up with systems that I didn’t use and weighed down with 12 years of evolution.  Folders, rules, smart folders … ways of organising incoming email that didn’t really add any value to my process.

Mail should not be a storage box or an insurance policy

I wanted to get away from using Mail as a de facto storage unit … keeping thousands of emails for that one time where you can say ‘Ah Ha! … see, 5 years ago I asked you to do this – and you didn’t!’.  After all, that’s the only reason for keeping all that email, right?  To play a game of ‘I told you so’ at some point in the future.  If you keep everything, the thinking goes, you’re safe.  You’re protected – it’s an insurance policy.  (I blame this approach on my previous corporate existence where games of ‘I told you so’ were common place).

But come on, that’s not working for anybody.

Email is a communication tool – not a safety deposit box.  I wanted to get back to that kind of simple efficiency – send a message, receive a message.  Not archive everything I’ve ever said. 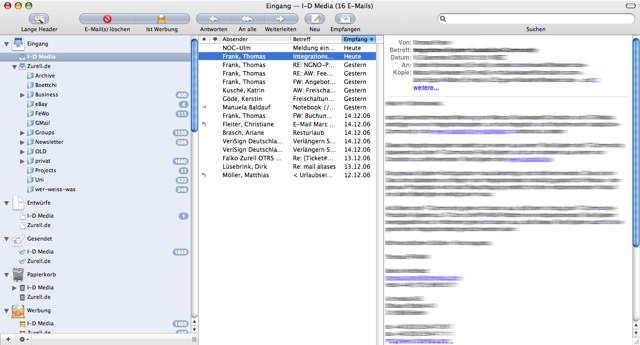 Benefits of IMAP over POP(3)

Further, I wanted a better process between multiple machines.  I have my work desktop machine, my laptop and another desktop at home.  Being stuck in the late 20th Century in many of my ways, I still used POP(3) for my email (as opposed to IMAP) which meant that there was no synchronisation of email between my machines.  Gah.

So – I needed to make 2 main changes: move my email away from POP(3) and streamline my methods of processing mail.

Enter Google Apps.  By using Google Apps to process my email I achieved the first significant step.  Google allows me to use my regular domain based email addresses (anything ending in @ticktockdesign.com) through their excellent Gmail service.  This means that email is automatically synched between machines (it’s an IMAP system) – once something is read, it stays read.  Delete it on one machine, it’s gone from all.  (Except, with google mail, it appears it’s never really ‘gone’ – just gone from view.)

Using Google Apps for my email has other benefits too – they give me 8Gb of storage for free.  8Gb.  That’s huge.  More email than I’m every likely to send or receive.  Also, they’re going to be better at filtering out spam than my web host or my ISP.  It’s safe to assume that gmail sees more spam in an hour than we’ll see in our life times.  If they can’t separate the wheat from the chaff, nobody can.

So far so good. (And here’s a google tutorial on how to move your email to their servers: use gmail for your own domain name)

Now then, about Mac Mail.  There’s nothing wrong with Mac Mail.  But it doesn’t encourage a streamlined process … it encourages the safety deposit box approach.  Keep everything.  Put it in folders.  Store it forever.

In the last 6 months or so, a new email client has been gaining in prominence – Sparrow Mail.  Sparrow is a Gmail specific email client.  It has a super clean interface that lends itself to dealing with email in exactly the way I wanted to – in, out, forget about it.  Email becomes a simple tool for communication again.

It’s a good little app, benefiting in no small measure from people’s familiarity with touch screen phones (a lot of it’s navigation transitions are reminiscent of the touch / swipe methods we’re now so familiar with).  You can do a lot with it – it has all the functionality available in Gmail (labels, starred messages, etc.) and although some of the processes are a little cumbersome (e.g. creating new labels cannot be done directly from the message), the majority of it is brilliant. 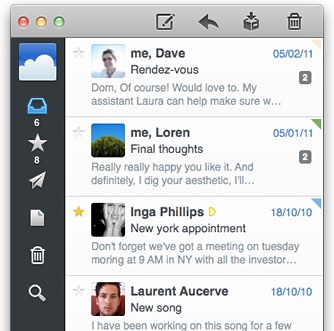 The message panel has a quick reply button.  No need to open the whole message in a new window to reply.  This facilitates a more conversational approach to email, and makes each message feel more like a quick SMS rather than a short novel.  Messages are grouped by sender / subject into conversations so you can scroll through the history of a conversation very easily.  This kind of conversational grouping is something that Mail now supports, but it seems much more natural in Sparrow – it’s certainly easier to view the conversation as a whole.

Sparrow also integrates with 2 services that I use all the time: Facebook and Dropbox.  Integrated with Facebook it pulls in peoples profile photos into my inbox … it’s a small thing, but it’s nice to give your inbox a bit of personality and increases the feeling that it’s a communication tool rather than a storage box.  Also, it gives you the option to add the contact as a friend in Facebook – a nice touch … if you’re in a conversation with someone and you see their Facebook photo in the mail, being able to quickly send a ‘connect’ invitation is a nice bonus.

As for dropbox, this is really cool.  Rather than sending a series of bulky attachments over email, you can drag a file right into the message and it’ll move the file into your public dropbox folder and put a link to that file in the email.  Brilliant.  You’re not sending large files, and the recipient receives a link rather than a bulky attachment.

So, overall, I’m extremely happy with my new set up.  Email is now a simple tool for communication again, and all my machines are in sync with each other.  There are a few minor gripes … but they come less from the set up and more from my lack of understanding of how Gmail works.  (Sometimes a message disappears from my inbox and moves to my ‘All Mail’ label … I’m never sure why.  And if something is unread and moves to my All Mail label it doesn’t show up as unread.  But like I say, this is more from my lack of understanding of gmail than anything else).  The only thing I wish I was able to do is add labels directly from the message window.  But that’s it.

To book & pay for your MOT, complete the short form below:

If you have questions and would like to discuss what’s involved in the MOT, let’s get a call scheduled … pick your time: